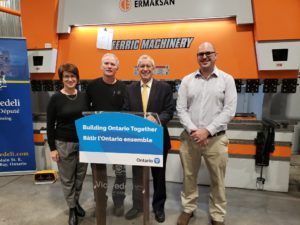 “Film and television production in North Bay and Nipissing has become a success story that is continuing to grow,” said Fedeli. “Our government is committed to strengthening this growing local industry because these investments create jobs, develop homegrown talent and support other businesses in the area.”

“These investments support economic diversity and growth in the region,” continued Fedeli. “We are building strong, vibrant communities and real opportunities across the north for the people who live here and companies that want to invest, sending a strong signal to the world that Northern Ontario is open for business and open for jobs.”