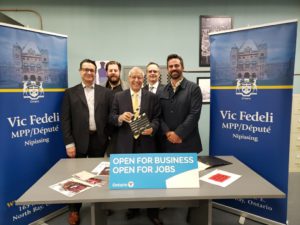 The Ontario government is supporting the film and television industry in the North Bay area by creating jobs and developing local talent.

Today, Vic Fedeli, MPP for Nipissing, announced an investment of more than $7 million to support seven film and television productions.

“Our government is committed to strengthening the growing film and television industry in Nipissing,” said MPP Fedeli. “This investment will drive economic development and job growth in the region and sends a signal to the world that Northern Ontario is open for business.”

These investments will create jobs, develop local talent and support other businesses in Nipissing.