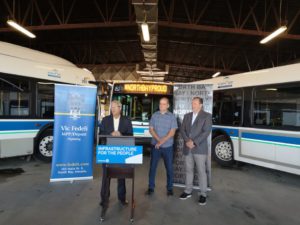 That means priority projects from the City of North Bay worth more than $11.4 million in total are being nominated under the Public Transit stream of the Investing in Canada Infrastructure Program (ICIP).

“We’re excited to get shovels in the ground; these initiatives promise to make a real difference in people’s lives by helping them spend less time commuting and more time doing things they love with those they care most about,” said Fedeli.

“Now it’s up to the federal government to approve them.”

The provincial contribution to the additional projects includes:

This is in addition to $300,000 the province committed to last month for transit terminal rehabilitation and  improvements, improvements to specialized transit buses including installation of automated vehicle location systems and security cameras, and for bicycle racks and related storage areas.

The projects are now with the federal government for final funding decisions as they are reviewed for eligibility under the ICIP program.