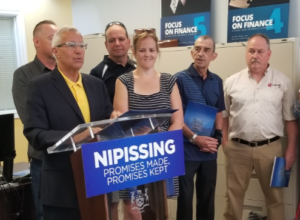 NORTH BAY — Ontario’s government is investing in what matters most by nominating $20 million worth of local infrastructure projects for funding as part of an effort to improve the province’s infrastructure, create jobs and grow the economy.

If approved by the federal government, the provincial funding share would total more than $6 million.

Nipissing MPP Vic Fedeli announced today that the Province has nominated the following projects to the federal government as part of the Rural and Northern stream of the Investing in Canada Infrastructure Program (provincial funding share in brackets):

“We need to build and maintain great road and bridge infrastructure to help get people to work and home safely, so they can spend more time with the people they love,” said Fedeli.

As of July 17, 41 new projects have been nominated to the federal government under the Rural and Northern stream. These are in addition to the 49 projects nominated for review on May 10.

The federal government will review these projects and make final funding decisions.

“We’re continuing to work with municipalities, families and businesses, to make smart investments in our infrastructure, and keep it reliable,” says Minister of Infrastructure Laurie Scott. “Our investments are creating jobs and growing the economy, shaping the future for hard-working families in Ontario.”