Government for the People Improving Highway Safety in East Ferris 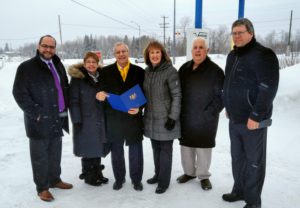 “Safety concerns regarding the intersection here at Highways 17 and 94 that have lingered literally for decades,” said Fedeli.

“It’s so exciting to be part of the government that is finally addressing these concerns once and for all.”

The successful contractor will be working on grading components over the winter, and the ministry anticipates construction will be completed in fall 2019.

Teranorth Construction & Engineering Limited was awarded the contract valued at $5,951,000.

“It’s so gratifying to be part of a government that is making Northern Ontario’s transportation needs, and the safety of Northern roads, a priority,” Fedeli concluded.