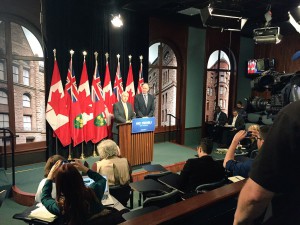 QUEEN’S PARK – Word today from the Ontario Provincial Police that they have laid breach of trust and mischief charges against David Livingston, former Premier Dalton McGuinty’s Chief of Staff, and Laura Miller, former Deputy Chief of Staff is a vindication of the opposition’s investigation into the Gas Plant Scandal, said Nipissing MPP Vic Fedeli.

“My then caucus colleague Rob Leone and I wrote to the OPP in June 2013 with the belief a crime had been committed in the Premier’s office. Today, we see the result of the 2 ½ year investigation that resulted,” said Fedeli.

Livingston and Miller are being charged in connection with the destruction of emails related to the cancellation of the two gas fired power plants leading up to the transition period to the Wynne administration in early 2013.

“It’s a disgrace that in the past three years there have been serious allegations levied against several high-ranking officials in the Government of Ontario,” said Patrick Brown, Leader of the Official Opposition.  “Now the OPP has confirmed that the actions of prominent operative Gerry Lougheed Jr., and Premier McGuinty’s Chief of Staff and Deputy Chief of Staff warrant criminal charges.  How many key decision-makers need to be charged before the Premier will take responsibility?”

“Premier Wynne campaigned on accountability and transparency, and Ontarians thought she would be different.  I don’t know what Kathleen Wynne can do to restore credibility to the Office of the Premier now that the OPP has laid charges against top  operatives,” Brown added.

Brown concluded, “We need to remember that this is not the end of the OPP investigations into the Premier’s Office.  Pat Sorbara, Premier Wynne’s Deputy Chief of Staff is still the subject of an OPP investigation of alleged breach of the Elections Act in relation to the Sudbury by-election scandal.”