Few people get an opportunity to re-shape a City, and Vic Fedeli took great advantage of his opportunity while Mayor of the City of North Bay. As a first-time candidate, Vic ran for Mayor in 2003, and was elected with a 75% majority. He was re-elected in 2006, with a 2nd landslide victory.

He and his team of Councillors and staff went on to change the look and feel of the City, while adhering to the principle of ‘the 3-legged stool’ – where all decisions must take the Financial, Social, and Environmental aspects into account. 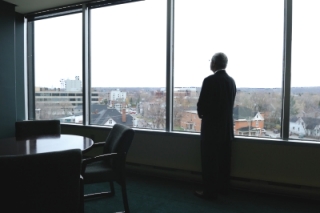 In a few short years, the City was transformed. Where North Bay once had the lowest reserves in Ontario, the financial fortunes of the City were restored, with Moody’s bumping the City up 5 points in 7 years – all the way to their top ranking. Council, through the Social Services Board, approved the first social housing to be built since the 1990s – the only community in Ontario to make it happen by investing municipal taxes. And North Bay was the only community its size to invest in a power generation facility, making electricity from methane at the Municipal Landfill.

There were a few highlights along the way. The main feature of Vic’s term centred around his ‘2020 Vision’ – where he saw the City in the year 2020, and a plan to get there.

As part of the Mayor’s back-to-basics approach to leadership, he made several changes to campaigning and to governing.

Mayor Victor Fedeli knows that this open and transparent form of government is what people continue to appreciate. He also published his attendance record at Council and on all the Agencies, Boards, and Commissions he served. In addition, he published his monthly expenses, including the names of every lunch guest.

All campaigns cost money, but Mayor Fedeli developed a set of very strict guidelines for both his 2003 and 2006 elections:

As for signs, Mayor Fedeli was as tired as you of election signs on public lands. He produced only lawn signs, and they were placed only on private property, where people made a personal choice to display a sign. No signs were placed on public property such as the overpass or parks, and absolutely no intersection or highway signs were constructed.

Once elected, Mayor Fedeli changed the rules inside the Council Chambers.

In the past, when a recorded vote was called, the Mayor started at the left-hand side and went around the table until all 10 Councillors recorded their vote. This gave an advantage to the Councillors at the end, as they could see which way the vote was going and alter their choice one way or another. Mayor Fedeli introduced randomizer software, where all 10 names were printed in random order, and no Councillor knew when their name was going to be called by the Clerk. This meant every Councillor needed to make their decision and be ready for their name to be called, and levelled the playing field.

Another move was to bring order to the lengthy Council meetings. Roberts Rules of Order were introduced. Now the mover of a motion spoke first, followed by the seconder, and then any Councillor could speak to the motion one time (only), and the mover received the last word. So rather than a back-and-forth bickering, each Councillor needed to have a coherent argument ready, with all their points made, as they wouldn’t receive a second opportunity. Not only did this speed up the meetings, but made for a more intelligent session.

The Mayor gave an annual ‘State of the Union’-style address at the beginning of each year. This helped the community understand what has been accomplished and which direction the Council will move towards for the upcoming year.